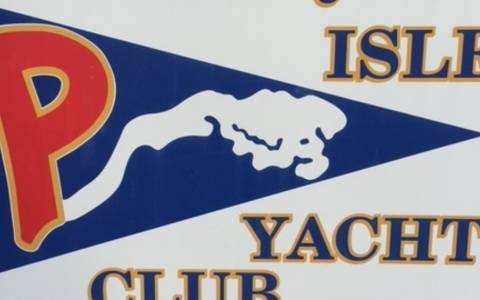 The Presque Isle Yacht Club formed in 1944 when a group of Erie boaters who rented their boat stalls from the Commonwealth of Pennsylvania at Presque Isle State Park joined together. They were then known as the Presque Isle Boat Owners Association. The group’s first project was to rebuild the existing docks near today's Presque Isle State Park's Nature Center Building. In exchange for the service, the Commonwealth, the State Park, and the Harbor Commission allowed the Club use of the property adjacent to the Nature Center. This proved to be a worthwhile partnership with the Commonwealth. Boat dockage that would have then cost $125,000 in repairs was reformed and expanded into a well-designed marina at no expense to the Commonwealth.
The Club maintained and expanded this facility until the late 1950's, when the Commonwealth rebuilt the peninsula and created Marina Lake in the process. The Presque Isle Yacht Club (renamed from Presque Isle Boat Owners Association), maintained a facility there until a few years later, when the Commonwealth reappraised the use of Presque Isle State Park lands and started controlling and restricting usage. The Presque Isle Yacht Club, as well as other facilities located on the peninsula, was challenged to find a new home.
In 1962, members of Presque Isle Yacht Club formed a partnership with the City of Erie, and with the guidance and assistance of Art Gardner, Erie's Mayor, and Joe Martin, Erie's Port Administrator and former Mayor, leased property in the west canal basin at the foot of Peach Street to relocate their yacht club. Once again, club members invested their own labor and money to quickly modernize this deteriorated area. The end result of this effort was the installation of docking accommodations for one hundred forty-two member boats and ten guest stalls.
Today, the Club offers a well-design facility, and caretakers on duty throughout the boating season attend to the needs of members and guests.
Immediately after the Presque Isle Yacht Club, you will leave the Bayfront Bikeway (temporarily) and walk north on the Sassafras Street Pier Public Access Walkway. The walkway will take you alongside the Bayfront Convention Center, Courtyard Marriott and picturesque Presque Isle Bay. Be sure to have your camera ready!