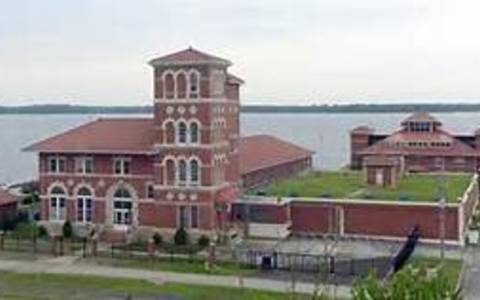 Details Likes
A landmark on the southern shore of Presque Isle Bay, the Erie Water Works’ Chestnut Street Facility has an extensive history of providing water to Erie and surrounding communities. Rapid growth of the city caused the early water works system, which used a network of wooden pipes, to be inadequate, and construction of this facility, known as the Chestnut Pumping Facility, in 1868. The project included the building of the stand pipe, intake pipes and the first pumps. Until 1908, water was drawn from Presque Isle Bay without the benefit of any treatment. Around 1908, the intake pipe was extended to 3.55 miles, passing under the peninsula to the present day intake crib in Lake Erie. Even with the extended intake pipe, 1,060 cases of typhoid fever were reported resulting in 135 deaths, and, in response, Water Works began treating water by Hypochlorination by 1912. The Water Works Office Building at the Chestnut Street Facility was built 1916-1918. Over the last 30 years, the architecture of the complex has been carefully restored.
On the north side of the Bayfront Parkway is “Big Bertha,” a 20-million-gallon-a-day high-duty pumping engine was installed over 100 years ago to bring the water from the lake to the new filter and treatment plant. The engine was more than three stories high, and, although it was taken out of service in 1951, it still stands in the pump house. A Pennsylvania Historical Mechanical Engineering Landmark, Big Bertha is opened periodically for tours.